“A list of quiet things: the sun, snakes, stars, Aminah’s heart every morning, the thick forest surrounding Wofa Sarpong’s farm, seeds, millet seedlings bursting from seeds, the furry mold sprouting on everything, Hassana since arriving on the farm, Wofa Sarpong entering Aminah and Hassana’s room at night, his excited exhalations, Hassana breathing by Aminah, Wofa Sarpong slinking out, the night, heaviness falling and contouring every part of Aminah till morning came, Wofa Sarpong’s wives on the goings-on in Aminah’s room, moonlight.”

-page 86, The Hundred Wells of Salaga by Ayesha Harruna Attah 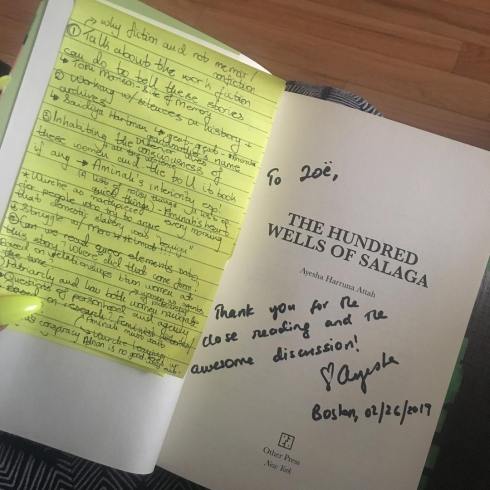 For a person who talks so loud and so much, one would be surprised to know how often I choose silence (here as well). Maybe other only children or people who were the youngest siblings by far can understand the fact of inhabiting worlds that you’ve mostly imagined and rarely or never share with other people.

Choosing silence used to feel freeing; it meant climbing trees I was too scared to jump down from, inventing languages only I could understand, and reveling in the sweet secrecy of it all. Sometimes it still feels this way, like when I laugh to myself as I witness irate passengers on the Orange Line huffing and puffing as though it will make the train move faster/make it less crowded or more fragrant-smelling, or when I think the funniest thought while crossing the street made all the more hilarious because I know I will never repeat it to anyone else. Sometimes, it feels like receiving good news and keeping it to myself for a few days or weeks, not because I doubt that I deserve the news, but just to savor it privately like smiling behind my own hand.

This evening, I’m choosing silence only to a certain extent, because writing this blog still feels like speaking out loud, except that I’m free to withhold or conceal whatever I want in a way I probably couldn’t if I called a friend or a relative in tears. I’m choosing silence because no matter how many times I’m convinced of the contrary, I’m always seeking confirmation for what I believe to be true, which is that my frightening lows and exuberant highs are too confusing and just too much to expect other people to navigate with me.

This silence looks like scrolling through my phone and coming up with reasons not to call each name that flashes across the screen: it’s too late there; she’s been a little distant lately and is probably struggling herself; she is definitely struggling herself; they are definitely struggling themselves; she has exams to prepare for; she is teaching; she will panic; she has too much work already and too many responsibilities; he will worry too much and call everyone else; so will he; it’s too late there.

Then there are also the warnings from recent and more distant pasts: [don’t call because] you will eventually overdo it; you will confuse/overwhelm/frustrate; you will bring down the mood; you will be too negative; you will be an uncomfortable presence other people will have to tiptoe around when they are also trying to be well; your sadness is inconvenient and even worse, contagious; you will take up too much space, you will confuse/overwhelm/frustrate– as an aside, I met someone new, but he has disappeared and reappeared and disappeared again, and I fear that it may be because I have shared too much and confused and overwhelmed and frustrated him. It’s also possible he’s just trifling. Who knows?

Today is a Tuesday, which means a long day, but not as bad as Mondays when I split my day between two different jobs. Today’s silence sounds like drumming my acrylic nails on the desk for exaggerated comedic effect, and talking faster and louder and trying to land more punchlines and more laughs. It sounds like responding to several text threads, gifs included, through tears as if nothing is wrong. It sounds like comforting and encouraging someone I admire with a gentleness and conviction that I rarely if ever show myself. It sounds like trying to cry quietly while I call my therapist’s voicemail box, and trying even harder when I hear my roommate in the other room because I don’t want to worry her (I get through because luckily the therapist happens to be working late.) It sounds like my phone buzzing on my bedside table from the people I did try to contact asking if everything is ok. I know I will not answer tonight. Maybe tomorrow, so I can say, “Thanks for checking in. I’m fine!”

Even in this post, I’m saying a lot without saying much at all. What I am able to say out loud is that I am working at a place where I feel my soul bowing down a little when I walk through the door. It feels that dire because I witness and experience all kinds of belittling and disrespect almost daily, and because I see so much wealth and power being hoarded in the name of “justice and equity” or “meeting goals and targets” or “turning theory into action,” meanwhile the world grows ill and dies while we have an unfair share of the necessary remedies. (If you know where I work you will probably ask why I expected it to be different). I am so exhausted and also ashamed for feeling this way, because I would not exist if my mothers did not have the fortitude (something I fear I am lacking or deficient in) to choose to live in the ways they did. I also know they would not want me to despair.

Because of this shame, I was hesitant to include the quote in full at the top of this page, for fear that it would appear as if I was drawing a disrespectful parallel between my life and Aminah’s experience of being commodified and enslaved in colonial era Ghana. Aminah lives most of the novel in her mind, and more importantly she was written in honor of the author’s own great-great-grandmother who was enslaved in Ghana during that era. Aminah means so much to me because she is almost always turned towards herself and her internal life, and I was lucky enough to be able to share this impression with Ayesha Harruna Attah, the author, when I interviewed her at an event at the Boston Public Library a few weeks ago. Most importantly, I love Aminah because she occupied a similar time period as my own great-great-grandmother, whose story I hope to honor one day.

My own list of quiet things continues to grow, especially because it includes memories and events I’m still terrified to think about, let alone to speak aloud. I’m choosing silence just for this evening but hopefully not for long after this, as I know that I can only poison myself eventually if I continue to hold some of these things in. I am trying to remember that I am not too much for seeking to be heard and loved in particular ways, and also that not everyone I choose will be able or willing to choose me and my breaking silence.

Leave a Reply to as told by amoafoa. Cancel reply